Looking for exterior aerospace coatings? Our experts provide free advice and quotes for your project.

An In-Depth Look at Aerospace Coatings

Aerospace coatings (sometimes referred to as aircraft paints and coatings or aviation coating) include coatings for commercial and business aviation as well as for military air market, satellites and launch vehicles. he aerospace sector is one of the most demanding sectors for coatings and materials. Aerospace coatings and paint technology needs to provide protection from corrosion, abrasion, weather, UV radiation, erosion, temperature variations, and more in the most extreme conditions.

Across the segments, aerospace coatings come in a range of technologies for use in both exterior and interior applications – from wing coatings to heavy-duty cabin coatings – for OEM (Original Equipment Manufacturer) and MRO (Maintenance, Repair, and Overhaul/Operations). With aerospace coatings, the sky is the limit.

In this article we look at the different aerospace segments and the coatings that serve them, as well as the aerospace paint companies and products available in the UK.

A quick overview of the aerospace coatings market in the UK

The aerospace industry of the UK is the fourth-largest national aerospace industry in the world, with domestic companies including BAE Systems (defence contractor) and Rolls-Royce (manufacturing engines for aeroplanes). In fact, 17% of the whole global aerospace market is supplied by UK manufacturing and the nation exports over 90% of what is produced. Broadly speaking, the aerospace coatings industry in the UK can be divided into four sectors with a range of specific coating needs:

A guide to interior, exterior and specialty aerospace coatings

It might be a surprise just how many surfaces in aircraft use aerospace coatings for protection or decoration (or both). Coatings for interior and exterior are exposed to different stresses and have different requirements in terms of finish and performance. Though solvent-based coatings are still the most common choice, air pollution regulations mean that water-based coatings are on the rise. Though we won’t go into every single coating for every surface (the range is overwhelming), we do cover the most important and most groundbreaking of the aerospace coatings on the market. 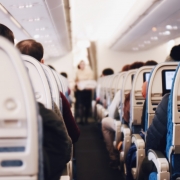 Interior cabin coatings need to be tough and also calming.

Last year, airlines ferried four billion passengers to destinations around the world and at any given time there are some 5000 commercial airplanes in the sky. For a passenger, the cabin is most of the flying experience and ensuring that the cabin provides a comfortable, positive and safe atmosphere is vital for customer satisfaction. The coatings used play a large role in creating this atmosphere. A cabin is high traffic and high use, with people, bags, and trolleys rolling through several times a day. The coatings used for every part of the cabin need to withstand this use without damage. Stains, scratches, and smudges all detract from the flying experience.

Are you looking for a specific Interior Aerospace coating?

Get a Free Quote

A Boeing 747 flying from London to New York will burn approximately 4 litres of fuel per second, adding up to roughly 80,000 litres of fuel across the whole 8 hour trip. The plane itself can carry about 180,000 litres, while the Airbus A380 can carry 320,000 litres of fuel. Given that fuel keeps the plane in the air, it is important to make sure that it is protected from contaminants from the fuel tank, and that the highly corrosive fuel does not eat away at the tanks and lines.

Aerospace fuel tank coatings need to have excellent adhesion to metal substrates, excellent fluid resistance, durability, a wide-ranging service temperature, and comply with a range of safety and performance standards and specifications. 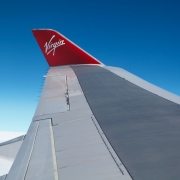 Smooth and uninterrupted airflow over a plane’s wing is vitally important to the efficiency of flight. A bird strike may be obvious in its damaging potential, but even bug guts can disrupt and damage an aircraft. Bug guts sticking to the wings of aircraft cause drag during takeoff and landing to such a degree that NASA and Boeing are working on developing a coating to combat the problem. Outside of the bugs, wing coatings need to deal with UV radiation, leading edge erosion, abrasion, and corrosion.

Leading edge erosion is a problem also experienced by wind turbines where the front edge of a wing or blade erodes due to constant impact with rain, dirt, bugs etc. When an aircraft wing arrives at the assembly and paint line it is, like all other commercial airplane skin panels, covered in a green protective coating. Once this is removed, the paint system is applied (see below). Aircraft wings are also coated with an impact resistant paint system. The walkways on aircraft wings are also coated, this time with a non slip walkway coating for escape routes and cargo floor panels like AkzoNobel’s Aviox.

Corrosion is a serious issue for the aerospace industry. It is hugely damaging, and airframe structures and surfaces affected by corrosion can impact flight safety of measures are not taken. Hexavalent chromium (chrome 6) was the most commonly used corrosion inhibitor for aircraft coatings until it was confirmed as a carcinogen and EU legislation put an end to its use.

OEMs, MROs, airline operators, the military and coating manufacturers had relied on chrome for years, but the search for safe, viable and effective alternatives led to a wide range of formulations. Aerospace primers now focus on alternatives like magnesium-rich, lithium-rich, and powerful epoxies designed to provide wear and corrosion performance with a faster MRO turnaround. These chrome-free coatings (also chromate free coatings) are still constantly improving, with new formulations receiving approval every year.

Example coating: Aerodur HS 2118 – a cutting edge, lithium based primer compliant with the AMS 3095A specification with the ability to replace washprimer systems. Aerodur 2111 is a chrome-free primer designed to Boeing specifications.

The coatings systems used for aircraft exteriors includes primers, intermediate coats, and topcoats, and a 747 will use about 1200L or 300-500kg of paint. An A380 can require up to 3600L of paint. These coatings are spray-applied in very thin layers, ensuring an even and perfectly cured application. Airlines repaint their planes every 5-8 years and the expensive painting period downtime can be days to weeks. In the interest of cutting downtime and increasing efficiency, selectively strippable systems have been introduced. They allow planes to be repainted up to 30-40% faster by removing the top and intermediate coats without damaging the corrosion-resistant primer. These systems also reduce the amount of chemical strippers required.

Example coatings: PPG Desothane HD Basecoat/Clearcoat system which provides a superior colour coverage with a high gloss clearcoat. PPG combine this with the chrome-free Desoprime 7049 primer for aircrafts, which is left intact in future repainting.

One of the key concerns in aircraft engineering is safety. Failures can lead to catastrophe, and coatings play an important role in controlling heat exposure, wear, and corrosion of jet engine components. The combination of fuel and heat requires extremely specialised coatings. Safety standards dictate that jet engine turbine blades are replaced when they reach the minimum expected lifetime, regardless of their condition at that point. Coatings are designed to protect and enhance the working of the engine and extend this lifetime as long as possible.

Thermal barrier coating (TBC) is one of the most important coatings used for jet engines. The engine is unique in the combination of damaging elements to which it is exposed – extreme cold on the exterior, extreme heat on the interior, erosion, and corrosion are all threats to its safe and effective functioning. A ceramic thermal barrier coating insulates turbine blades against heat and the stress of high speed rotation for extended periods. TBCs are applied as a system not a single coating, usually comprising of a bond coat, a thermally gown oxide, and a ceramic thermal barrier coating (often yttria-stabilised zirconia).

Though the temperatures 6 miles in the sky may be cold, overheating is a problem for aircraft due to the heating powder of UV radiation. Traditionally, planes have been painted white for just this reason – it can reduce the temperature of the interior and exterior of the plane by a substantial amount, and save on energy expenditure for air conditioning. There are now solar heat management coatings which allow for a greater colour variety by allowing solar heat to travel through the topcoat pigments and reflect off the white primer coat.

Anti-glare coatings for the cockpit prevent glare from obscuring the vision of instrumentation and dashboards, allowing pilots to perform their jobs more safely. Anti-erosion coatings work to prevent the constant impact of rain, ice , dust, and other particulates causing erosion on exterior surfaces, especially the leading edge of wings and other strike areas. Anti static coatings for aerospace is used for radomes and antennae to obtain surface conductivity on non-conductive substrates,

Aerospace painting companies in the UK – manufacturers and products

AkzoNobel, PPG, and Sherwin-Williams are the top three aircraft paint suppliers in the industry, and all three operate in the UK market. The manufacture, development, and supply of coatings for the OEM and MRO sectors of the aerospace market is a big business, and there are many companies that provide products for it. AkzoNobel products include the Eclipse, Alumigrip, Aerobase, and Aerodur lines, PPG produces Desothane, Andaro, and Desoto, and Sherwin-Williams aerospace coatings include the JetFlex, SKYscapes, and Soft Swade lines.

Would you like to know more about aerospace coatings or aerospace paint suppliers for your project? Get in touch! Our experts are here to help. In collaboration with our coating partners, we will connect you with the coating solution for your needs. Just use the button below and tell us a little more about your project to get started – the quotation service is 100% free!

Would you like to know more about aerospace coatings or paint suppliers?